Meet the winning teams of the Data for Climate Action challenge and learn more about their projects.

THE PROBLEM: Mexico City is the most congested city in the world, and uses more than 20 million liters of fuel every day for transportation. In 2016, the local population was exposed to more than twice the levels of ozone and fine particulate matter (PM2.5) recommended by national air quality standards. It is estimated that meeting PM2.5 and ozone standards in Mexico City could avoid up to 10,856 deaths each year. 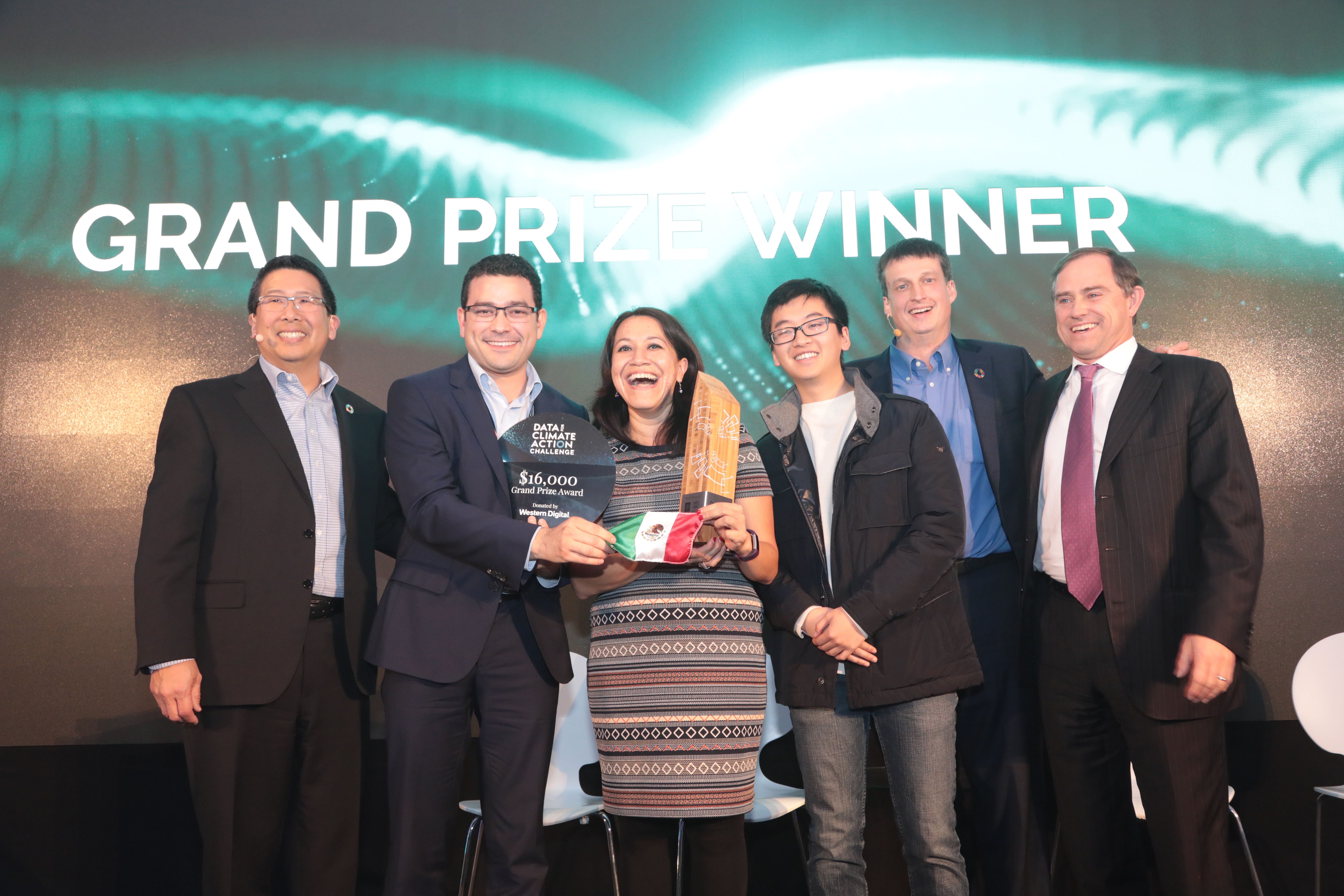 THE PROBLEM: Most of the road network in Africa is unpaved, so it is particularly susceptible to damage caused by rain and flooding. Global climate change is predicted to lead to more frequent and severe weather events, including more damaging floods.

METHODOLOGY AND APPROACH: The team estimated flooding risk for different roads in Senegal, and then used mobility data to understand how much different roads are used. The team then built a framework to optimize the allocation of a certain budget to road upgrades: this framework indicates which upgrades should be prioritized in order to maximize the accessibility provided by the road network during floods.

POTENTIAL IMPACT: The framework developed by the team could be used in Senegal to optimize road upgrades and increase the resilience of the road network to flooding. The framework could also be modified for application in other countries. 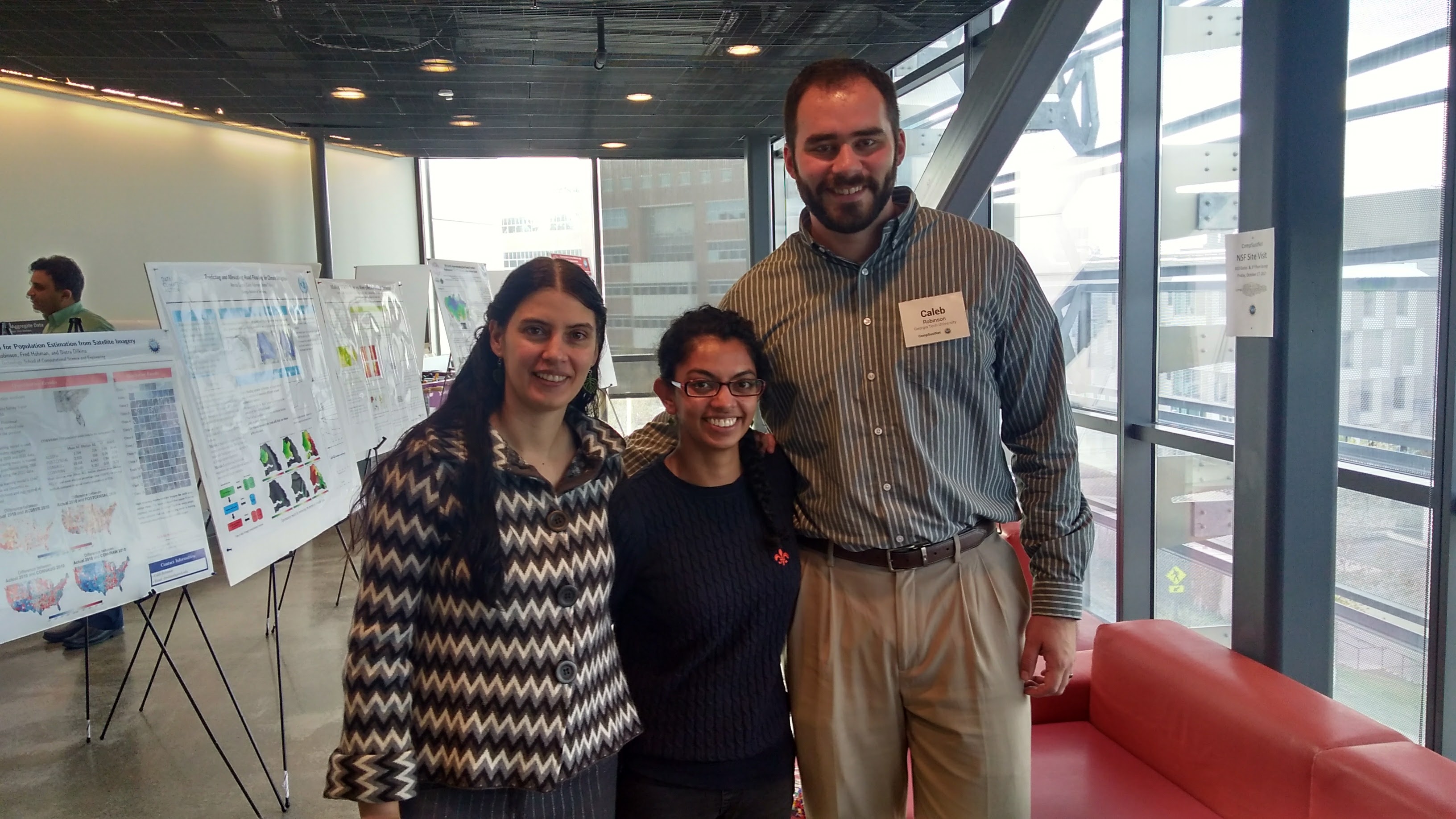 THE PROBLEM: While a number of tools use real-time data (e.g., satellite imagery) to monitor changes in vegetation in forest ecosystems, few or no tools are designed to monitor these changes in non-forest ecosystems (such as shrublands, woodlands, and natural grasslands). The team set out to devise such a system for the Cape Floristic Region of South Africa, a hyperdiverse fire-prone shrubland and Global Biodiversity Hotspot. The region faces a number of threats, including habitat loss through land-use change, invasion by alien species and climate impacts.

METHODOLOGY AND APPROACH: The team developed a statistical model for the regrowth of natural vegetation following wildfires using historical satellite imagery. The model was used to predict the expected recovery pattern of healthy vegetation based on time since fire, soil, topography and climate. These expectations were compared with recently acquired satellite imagery, and areas deviating from expectations for healthy vegetation were highlighted. The team then used hi-res satellite imagery and weather data to understand the cause of these disturbances. They built a demonstration web application as well as a smartphone application.

POTENTIAL IMPACT: EMMA could support more responsive and informed ecosystem management in the Cape Floristic Region. The tool could also be applied in other ecosystems with similar dynamics — such as the Californian chaparral, Australian kwongan, and parts of the Mediterranean basin — or modified for other non-forest ecosystems. 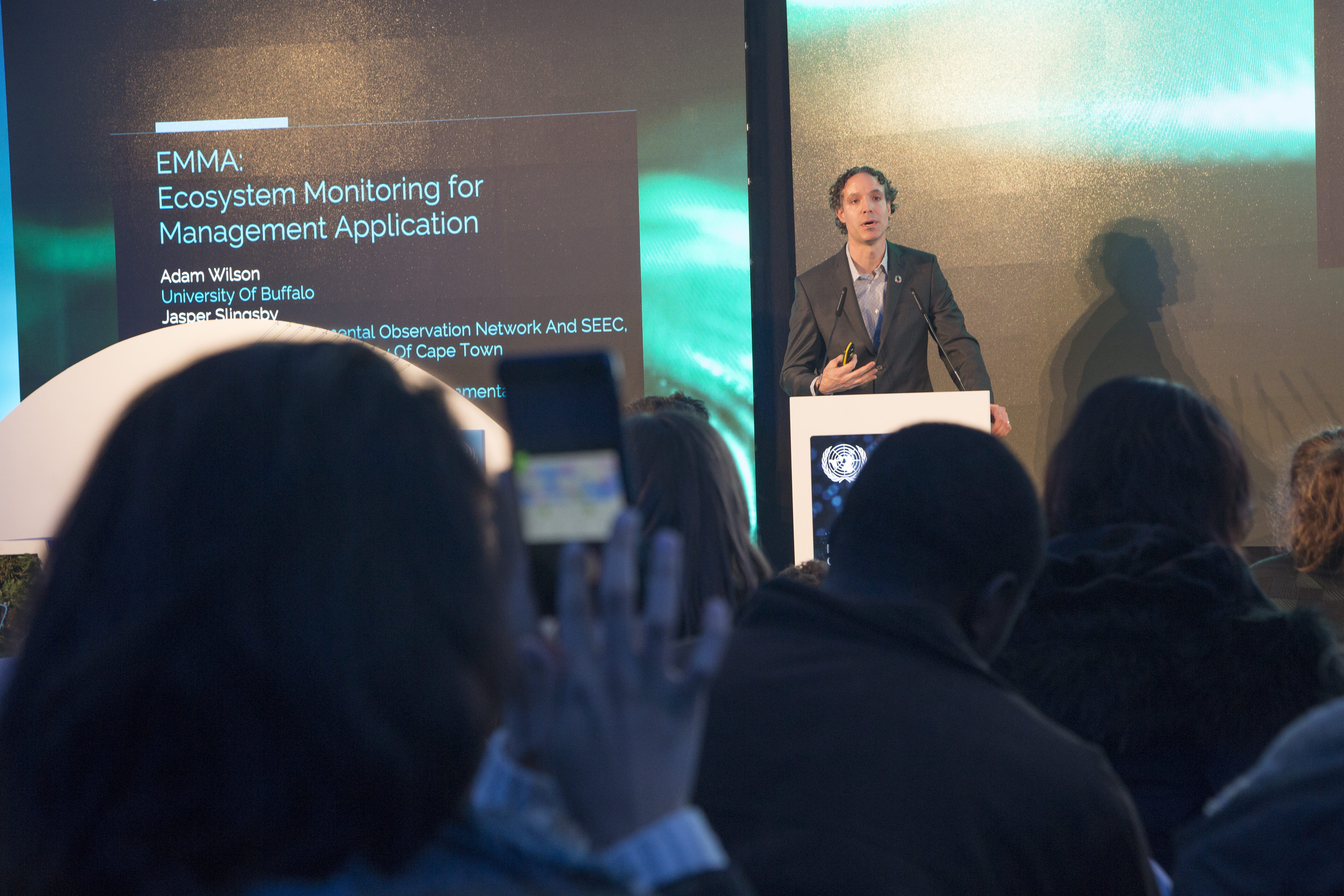 THE PROBLEM: Air pollution can affect local economies when people opt to stay indoors and avoid restaurants, shops, and recreational spaces. With rising global temperatures, air pollution is expected to worsen due to shifts in temperature, humidity, wind patterns, and precipitation.

METHODOLOGY AND APPROACH: The team quantified changes in consumer spending and how these relate to shifts in daily average air pollution, as well as postal code, characteristics of pollution measurement stations, and day of the week. 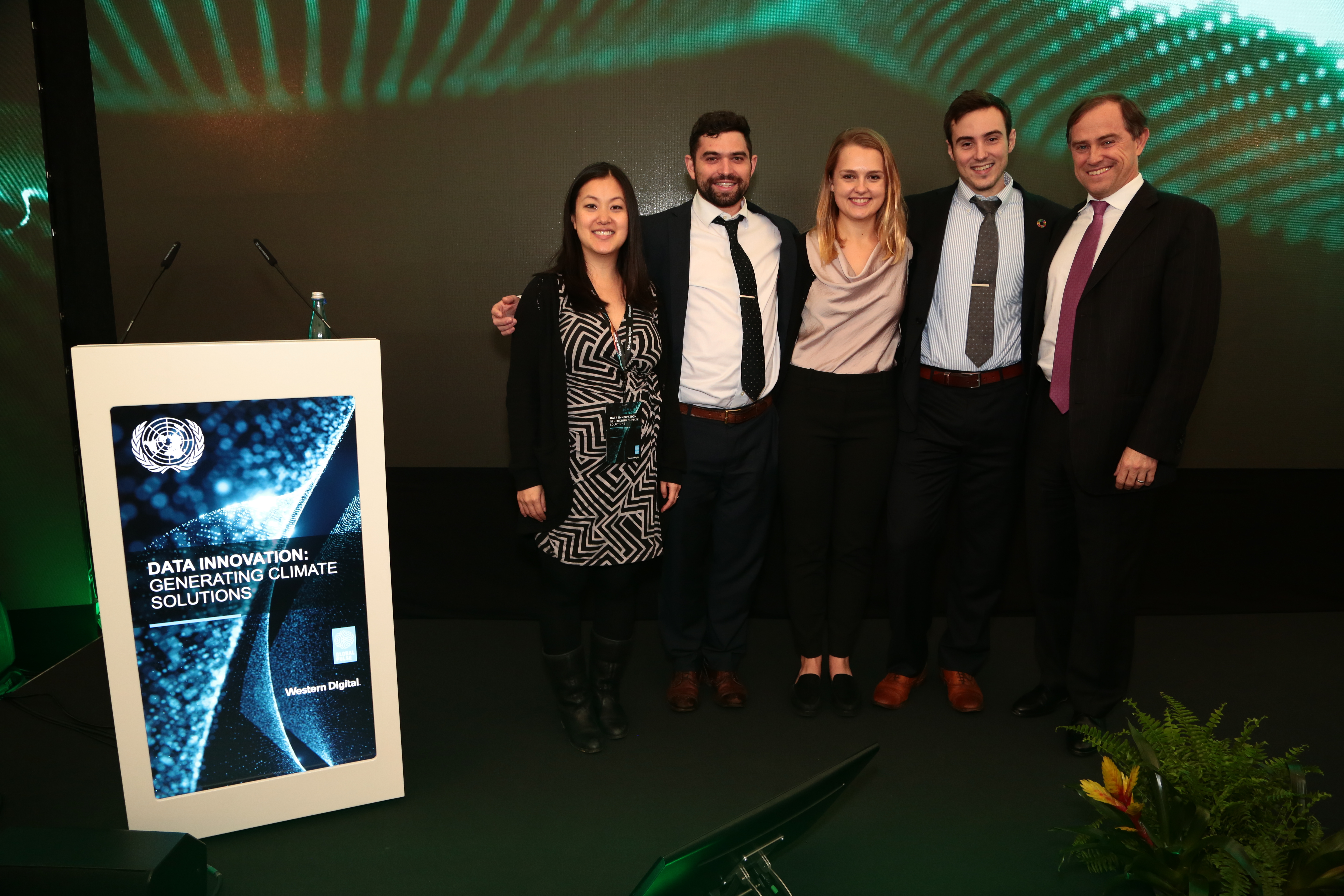 TITLE: “A Framework for the Optimization of Winter Wheat Seeding Date”

THE PROBLEM: Climate change is already impacting agricultural systems worldwide. Shifts in wheat production have implications for farming and food security around the world. Every year and geographic location has a particular best seeding date for wheat, which depends on various climatic factors. Early or late seeding is reflected in a yield penalty in the harvest. 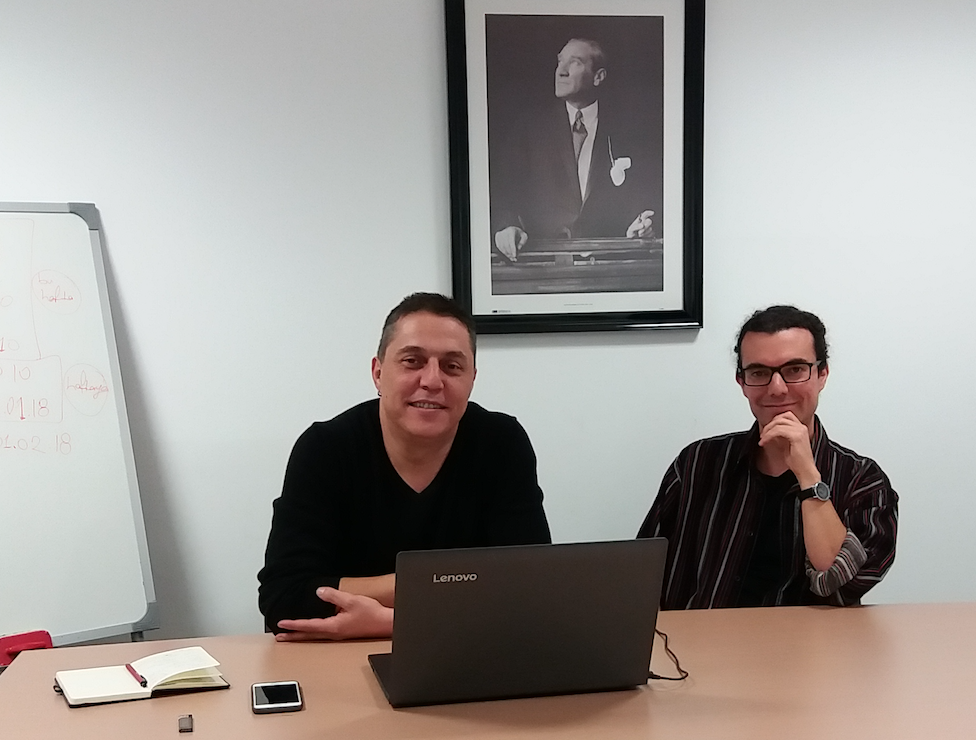 THE PROBLEM: The Paris Climate Agreement calls on the global community to limit global temperature rise to 1.5 degrees Celsius through significant reductions in carbon emissions. Cities are positioned to be significant actors in this process, as they can reduce emissions through improvements to building and transit efficiency, and face dramatic consequences of inaction through risks posed by sea level rise and extreme weather events.

DATA SOURCES USED: Weather data from Earth Networks; air pollution data from Plume Labs; traffic data from Waze; social media data from Crimson Hexagon; publicly available data from the City of New York, from the U.S. Census, and from the U.S. Department of Energy, among others.

METHODOLOGY AND APPROACH: The team developed a model and dashboard of hourly greenhouse gas emissions for each building and street segment in New York City. The methodology combines physical modeling and statistical learning and accounts for local variations in temperature and the urban heat island, building energy efficiency, building type and land use, traffic, street trees, population density, and household income. The team then compared the results from the model with air quality data and social sentiment data derived from Twitter activity to understand the environmental and psychological impacts of emissions.

POTENTIAL IMPACT: The tool developed by the team can provide city leaders and urban policymakers with a near real-time understanding of hyperlocal patterns of carbon emissions across their cities. The model and tool could also be adapted for other cities around the world.